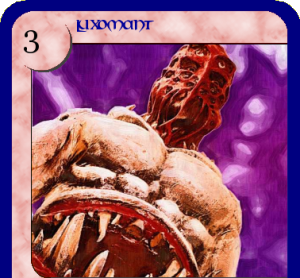 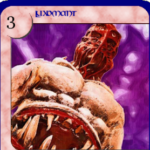 I you like the online game, you will also love its Collectible Cards / Role playing version, easy to learn and play and totally free! (download+print the pages out from the site)

(Printable version of the rules – PDF) 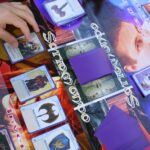 Sottomondo Cards is all about the struggle for conquering the Kingdom, just like on the online game.

It’s a game for 2 to 6 players, it is very easy to understand and can be learnt even by young children.

During the game each player walks inside a castle haunted by monsters and he faces different events using his skills and owned items.

When a player wins a duel his Level advances by one, if he loses his Level decreases.

The player reaching the 10th level conquers the Kingdom and wins the game.

By winning two duels, you get the chance to change your player Class (which is, character type). This way you will acquire new and special character skills. 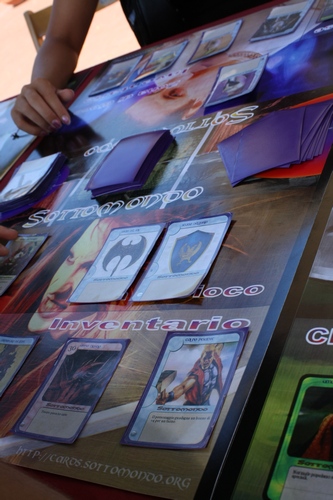 You should have downloaded, printed and cut out the card decks and possibly also the game board and the score-markers. Below you will find the links to all the resources:

Every player gets 4 cards from the castle deck and puts them on his “INVENTORY” area.

NOTES: You can compose the castle deck as you want but you have to respect some proportional rules to maintain the right balance of the game. The ordinary composition of castle deck is:

In every turn, for no more than two times, each player plays these steps: 1)Pass trough 2)Strategy 3)Reaction

The player who begins get a card from the top of the castle deck then he shows that card and puts it in the middle of the gameboard. 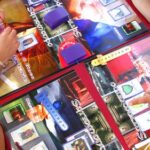 Reaction means to put one card from the inventory to the game area to face a duel or an event.

If the player wins or equalizes the duel he can start another round from step1. At the end the second round it begins the turn of another player.

When the player reach the level 3 he can get a card from the top of the class deck, so he changes his character whit new skill and powers. You can change your class every two levels.

Some cards last until the end of the turn, that means that when a player finishes his last round these cards remain in the game area during the rounds of the other players until he starts a new round. Before beginning a new round a player has to discard all the cards that last one turn and consumed their effects. The player also has to control that there aren’t more than 4 cards in the inventory area.

Players can collaborate whit a player who is going to face a hard duel. In return they have to require a reward among the cards that the helped player has in his inventory or game area. The person who faces the fight is free to accept or reject the help;if he accepts he must pay for the help received.

The player who offers the collaboration can play as when he deals with a monster or an event, so he can bring into play an object or a skill (also a class skill). Although as a collaborator is not liable for the loss of anything, or get any level if they win.

The monsters, both those experienced and those in inventory can be used as companions in duel thanks to the skill card “Summoning”.

When the summoning is played on a monster just met, the monster card moves into the game area and the round proceeds as if the player equalizes the duel.

Some times players have to fight each other. If these happens:

There are some rules to observe:

The game ends when a player reaches level 10 without being reached by others in the same turn.
If he is reached, the fortunes of the game shall remain suspended, the player does not draw a card from the castle deck, but he begins fighting a player chosen among those at 10 who have achieved it.
Do it until the contestants are not relegated to Level 9, and there is only one winner with Level 10.